At the recent AGM, new Officers for the UK Radon Association were elected. We are delighted to announce that Lynn Cooper (Principal Waste Management Consultant and RPA at Studsvik) has been elected as the new Chair of UKRA. Lynn said, “I would like to thank the out-going Chairman and Secretary, Martin and Rebecca, for all their hard work at UKRA over the past few years. Their dedication has made UKRA what it is today, and I hope I can continue their work.

The recent Radon Symposium was a great success, and it was excellent to see so many people attending and presenting from abroad as well as the UK. This is testament to the strong connections that UKRA has developed with local and international partners. I hope that during my tenure we can build upon and develop these relationships and continue to raise awareness of radon in the UK.

I look forward to working with the new Vice Chair, Darren Turner, our new Secretary, Victoria Lilley, and all of the Board and members as we continue UKRA’s mission as the professional body for all those involved in radon testing, radon remediation and radon protection across the UK.”

In this special video that was produced for the UK Radon Association as part of our 2017 Radon Awareness Week campaign, internationally renowned radiation biologist Dr Aaron Goodarzi explains how exposure to radon can cause DNA damage leading to lung cancer, and why protecting children from exposure to high levels of radon is particularly important.

The UK Radon Symposium is a one-day event which will be held on 14th April 2016 at Bailbrook House Hotel near Bath. Delegate registration is now open at www.ukradonsymposium.com, where you will also find more details about the speakers, programme and venue.

The Symposium is open to members and non-members and will be of particular interest to those involved in the fields of indoor air quality, radiation protection and healthcare. We hope that you followed our blog, www.radonweek.co.uk during Radon Awareness Week last week.

Now that this year’s campaign has ended, the UK Radon Association Chairman, Martin Freeman, has written an open letter of thanks to those who have supported the initiative, as well as setting down objectives for future work.

You can read the letter by clicking below. The purpose of European Radon Day, which has been initiated by the European Radon Association (ERA) is to give a focal point for radon awareness activity for all European countries. And what better date than Marie Curie’s birthday, which also falls within global Lung Cancer Awareness Month.

ERA has designed a poster which can be downloaded and shared with friends, family and colleagues to spread the message about radon, the second leading cause of lung cancer, after smoking.

The poster can be downloaded in 10 different languages, maximising its appeal and reach. Visit www.radoneurope.org to view & download the posters and find out what different countries are doing to celebrate and spread radon awareness.

An article about radon and the upcoming UK Radon Awareness Week has been featured in Building Design & Construction Magazine‘s latest issue.

Packed with information about radon, the article promotes the use of UK Radon Association members for all aspects of radon work.

You can download a PDF copy of the article by clicking below. The very first UK Radon Awareness Week campaign will be happening between 7th – 13th November 2015. The campaign is being organised by UKRA in collaboration with Public Health England (PHE) and BRE Academy.

The campaign aims to raise awareness of radon, the second leading cause of lung cancer, amongst a wide range of people in the UK. From the general public to employers, healthcare professionals to those in the construction industry, an increased awareness of radon will lead to a reduction in the number of avoidable lung cancer cases claiming lives each year.

A dedicated website, www.radonweek.co.uk has been created, and a number of posters are already available for download. More resources, including a video of an awareness ‘stunt’ that UKRA will soon be carrying out will be available soon.

Wednesday 4th February 2015 is World Cancer Day, giving us a fantastic opportunity to raise awareness of radon gas, the second leading cause of lung cancer in the UK.

One of the key messages of this year’s World Cancer Day is encouraging people to make Healthy Life Choices, with the organisers stating “Empowering people to make healthy choices and reducing the social and environmental risk factors for cancer are key to achieving the global goal of reducing premature deaths from non-communicable diseases (NCDs) by 25% by 2025 and reaching the targets of the World Cancer Declaration.”

Our goal is to increase awareness of radon so that people can make a decision whether or not to test their home (we recommend that all homes are tested). Radon testing is the only way to know whether a building contains elevated levels of radon and whether the occupants are at risk of developing lung cancer.

We have created a simple factsheet and we hope that this will be shared with friends, family and colleagues to spread the message that radon is the second leading cause of lung cancer. Print it and pin to your staff noticeboard, tweet it with the hashtags #worldcancerday & #radon or email a link to your nearest & dearest. In November 2014, eighteen thousand households across Gloucestershire were offered a free radon test as part of a campaign driven by Public Health England (PHE). 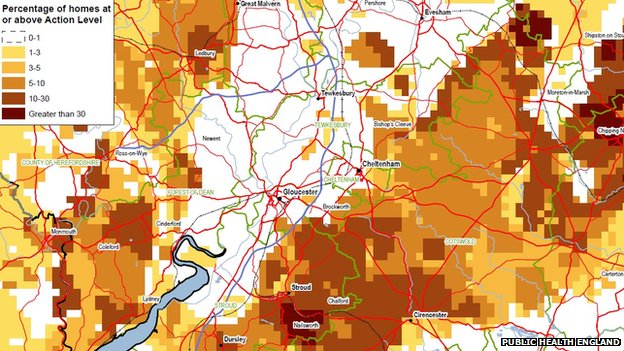 Letters were sent to households in areas covered by Cotswold District Council, Forest of Dean District Council and Cheltenham Borough Council inviting the householders to apply for a free test kit.

By mid-December, PHE reported having received responses from over 4000 householders. This represents roughly 25% response rate from the Cotswold and Cheltenham areas and over 21% from Forest of Dean.

UK Radon Association encourages all those who have been offered this free test to take up the offer, as testing is the only way to know whether or not a home is affected by harmful levels of radon. A test for a standard-sized property will usually cost in the region of £40 – £50, so you are saving money whilst also carrying out an important safety check on your home.

If you’ve been offered a free test but have concerns about the implications of taking the test, the process or the results here are some facts that may help you decide:

If you do not live in one of the above areas but wish to carry out a radon test in your home, radon test kits are available from UK Radon Association members listed here. Two members of the UK Radon Association travelled to Charleston, South Carolina in September for the International Radon Symposium 2014. The annual Symposium is organised by AARST (American Association for Radon Scientists and Technologists) and this year attracted record numbers of attendees from industry, State and Government organisations, NGOs, research institutions and cancer charities.

Martin Freeman, Chairman of the UK Radon Association had been invited to present his paper discussing the conflict between basement waterproofing techniques used in the UK and radon management. This paper is due to be published shortly and a link to download it will be added to the blog when available.

The Keynote address was given by Janet McCabe, Assistant Administrator for the EPA’s Office of Air and Radiation and  was followed by an impassioned talk by Janice Nolen, Assistant Vice President of the American Lung Association about tackling the number of avoidable lung cancer cases caused by radon exposure each year. Both Ms McCabe and Ms Nolen were interested to hear about the UK Radon Association and extended their wishes of support to the organisation.

The three-day conference featured a packed schedule of talks from international speakers covering everything from radon testing protocol in multi-family units (apartments) to policies for radon resistant new construction (RRNC), methods of risk communication with different stakeholders to frameworks for ensuring quality installations by radon professionals.

AARST were extremely welcoming and were keen to encourage more international links. Radon is a worldwide issue and there is much that can be learnt and shared globally.

The Symposium also saw CanSAR (Cancer Survivors Against Radon) participating in the #WhipLungCancer campaign. Following the global success of the ‘ice bucket challenge’ earlier in the year, various lung cancer charities joined together to promote this campaign, which sees volunteers receiving a whipped-cream pie to the face in exchange for donations from family & friends. Well done to all those involved, including AARST Executive Director Peter Hendrick!