Radon is a naturally occurring radioactive gas that can affect properties of all types, ages, locations and uses. The gas is formed when uranium in the soil and rocks beneath us decays. When it permeates the ground into open air, it is quickly diluted to low concentrations, however if it rises into a building, it can become trapped and build to dangerous concentrations.

What risks are associated with radon exposure?

When concentration of the gas is high, the radioactive decay products are inhaled and some are deposited in the lungs, where they continue to emit radiation. Each year in the UK over 2000 people die from lung cancer, developed as a direct result of exposure to radon. The gas accounts for the second greatest number of lung cancer cases in the UK, second only to smoking.

Where is radon found? 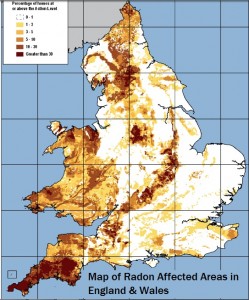 Properties that lie in certain areas of the UK are more likely to contain high levels of radon, due to the underlying geology and varying amounts of uranium present. Many people mistakenly believe that radon is only of real concern in the South West, however the latest set of indicative maps published by the Health Protection Agency (HPA, now known as Public Health England) show that radon can be found nationwide. Areas where it has been estimated that more than 1% of properties will contain high levels of radon are classed as radon Affected Areas.

Buildings with basements are also more susceptible to high levels of radon accumulating, as there is a larger surface area in contact with the soil through which the gas can permeate. Public Health England advise that any property with a basement, regardless of whether it is located in an Affected Area or not, will have an increased probability of containing high radon concentrations.

How do I know if there is radon in a building?

Radon is odourless, colourless and tasteless. To assess the level of radon in an existing building, a test must be conducted.

Various digital monitors are now available, however the most common method of radon testing involves placing special passive detectors in the property for a period of time before returning them to a laboratory for analysis. Air enters the detectors and any radon particles will make small etches on a special plastic lens within the detector. The shape, size and number of these etches is then analysed under a special microscope in the laboratory. 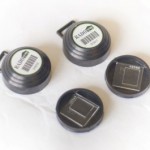 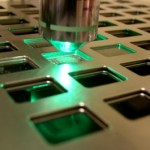 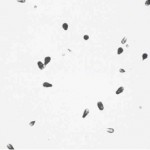 Passive radon detectors are small and discreet when in use, and the whole process including laboratory analysis is inexpensive.

As radon levels fluctuate according to seasonal and occupational variances (e.g. amount of ventilation through opening windows), a three month period is normally recommended to take such inconsistencies into account.

The result is given in a unit called becquerels and expressed as becquerels per cubic metre of air (Bq/m3).

The number of detectors required depends upon the size, layout and usage of the building. A radon testing provider can advise on this.

What is a high radon level and what are “Action Levels”?

Current advice from Public Health England is that “for levels below 100 Bq/m3, your individual risk remains relatively low and not a cause for concern. However, the risk increases as the radon level increases.”

The Government advise that remedial action should be taken in any residential property with an average annual radon level of 200 Bq/m3 or more. This is referred to as the Action Level.

In 2010, the Health Protection Agency (now part of Public Health England) began advising that households with radon levels over 100 Bq/m3 should “strongly consider” taking remedial action. It is also advised that when carrying our remedial action, the aim should be to reduce levels to below 100 Bq/m3 where possible. This is therefore referred to as the Target Level.

Different ‘action levels’ levels apply to workplaces – see our Information for Employers page for more details on dealing with radon in the workplace.

How does radon get inside a building? 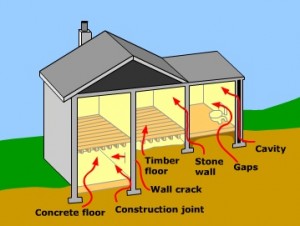 Some radon will passively infiltrate into the building, for example through cracks in the foundations and gaps around service pipes. Evidence has also been found to demonstrate that radon can also pass through certain materials, even those which provide an adequate barrier to water penetration.

The main mechanism through which radon enters a property, however, is advection. This is the movement of the gas from the soil to the lowest point of pressure, which is usually inside the building. This means that the gas is literally being sucked from the ground into the building, and the greater this pressure difference is, the faster the rate at which the gas is drawn inside is.

How can high radon levels be reduced?

The good news is that there are several techniques available that can successfully reduce radon concentrations within a building, and prevent future intrusion of radon.

As radon enters a building due to the pressure differences between the building and the ground, the main methods of dealing with radon in existing buildings is to alter this pressure ratio. This can be done either through the installation of a positive pressure unit or a retrofit sump system. 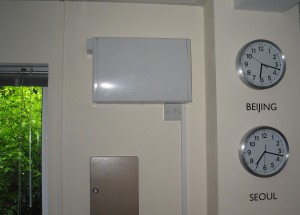 A positive pressure unit is a special type of fan that draws air from outside and disperses it throughout the building. The effect of this is a very slight increase in the internal air pressure. By increasing the air pressure within the property, gas in the soil is no longer drawn towards the building as it does not represent the path of least resistance. Positive pressure units can either be fitted in a roof void (loft) or in a room with an external wall. 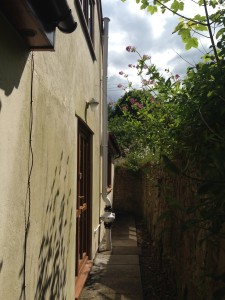 A radon sump is the term given to a small void created beneath the building. This void will be approxmately the size of a builder’s bucket and is created in the hardcore beneath a building. The purpose of the sump is to create an area of low pressure. Soil gas should now be naturally drawn towards the sump as it has provided a new path of least resistance. Pipework can be taken from the sump to safely exhaust the gas that has collected away from the building. It is recommened that an inline fan be fitted to the pipework to ensure that the gas is being moved away from the sump. The exhaust pipe should discharge well away from any doors or windows, and this will usually be above eaves level.